The Need for Leadership in Building Community Resilience. Lessons from ‘Shane’ 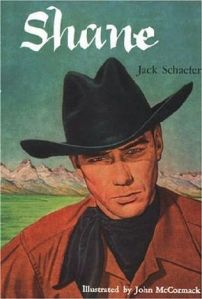 I remember being a fourteen year old boy in an English class and being told that we were going to read a book called Shane as our next assignment. Being told by the teacher that it was a novel set in the West of America in the late eighteen hundreds certainly awakened some interest in us; we were a generation of schoolboys brought up on a diet of Cowboys and Indians.

The novel became very important to me at that formative age; unusually, considering the subject matter, it contained profound insights in to a number of key themes that would become increasingly important to me. The need to right injustice, what it meant to be a man and the responsibilities this placed upon me and the importance of comradeship and community in our lives.

I was reading the novel at home when my dad came in from work and he immediately began to extol its virtues to me. He had read the novel when he was younger. This was to be the first of many literary conversations shared with him. It had never occurred to me previously that we shared a common love of reading; in a working class family in the sixties I feel sure this was reasonably uncommon.

Briefly the story concerns a group of homesteaders who are fighting to retain the land they are farming against the threat posed by the local rancher. I know now that the rights of either group were highly dubious, but the claims of the indigenous North American people were beyond my concerns back then. Into this volatile mix rides ‘Shane’, a loner who appears at first indifferent towards this very local dispute. He is a man of quiet power who is both exciting and dangerous to the homestead community.

After a series of skirmishes between the two rival parties the rancher brings in a hired killer and the resolve of the homesteaders begins to diminish. The one exception is Joe Starrit the man who has befriended Shane and whose family have taken him to their heart. It is obvious to all that Shane is the only man in the group with the skill in gun fighting that would give any hope against this killer, Stark Wilson. However Shane is a man resolved to distancing himself from his past and at first he is reluctant to become involved. It becomes obvious that if the community is not to lose all it has strived for then Shane will have to face this killer and his own past. In a memorable final scene, Shane kills both the hired killer and the landowner and despite the imploring of the young boy, who is the stories narrator, he rides away.

So you might well be asking yourselves what possible relevance this politically dubious and violent yarn has to the question of leadership in community building. Well it seems to me that contained within this story are all the classic ingredients that we find whenever the ‘authorities’ try to involve themselves with a group of people who are trying to establish a good life for themselves; and the only real support they require is to be left alone.

Leaving to one side the problematic nature of land grabbing in the American West is seems to me that the small groups who seized land and set up loose confederations of homesteaders embarked upon a very purist form of community building. They were literally building from the bottom up, making things happen based solely upon their own ingenuity, resolve and energy; between them in a relatively short space of time they were one of the factors that helped to create the most powerful nation on Earth. This pioneering spirit is, I believe, the reason why so many credible models of community development come from the New World. They developed solutions to very real problems without any of the advantages and disadvantages of an established social contract, but with a belief in the sanctity of individual resilience in the face of institutional control.

However, Shane reminds us that will, passion and endeavour are not enough, when a perverse external influence is brought to bear that is very difficult to resist. The power imbalance between the homesteaders and the rancher mirrors that between our own communities and the state, and in spite of the best of intentions succumbing to this outside pressure is all too easy to do.

Shane’s initial reluctance to become too involved points us toward the issue we all face as community developers; if we provide the solution then we are part of the problem, we add to the conspiracy of reliance that authorities have cultivated and that we should try to avoid at all costs.

In the end though, someone had to provide the mixture of ability, experience and commitment required that couldn’t be found elsewhere amongst the gifts and abilities that existed within this group. I suspect that this is often the case and something that we should not ignore whilst we strive to support our communities to grow stronger. These days we require the services of a peacemaker rather than a gunslinger, but, community building itself requires some very specific skills.

It is to Shane’s eternal credit that he rode off afterwards; any other ending would have seen him become part of the problem.